As many of you remember Saturday morning's weather for this weekend's orienteering course at Rockwoods Range was a little poor: windy, cold and snowing. But, as it has been said: "there is no bad weather, just bad gear", so I geared up and headed out. As I had planned, I chose the green course and electronic scoring.

One thing I noticed was that the clue sheet was covered in some sort of hieroglyphics. Apparently on the green course they use the IFO symbols, I probably should have learned those.

Off I went. I felt pretty good, a little cold as I left but from my two previous events I knew I would soon heat up. Down the road and past the playground, over the hill and then halfway down the gully and bingo!

Oh yeah, I forgot the 45 minutes of fruitless searching, then looking for #2 and backtracking to #1, then bingo...

It had not started well. #2 was easy, because I had already been there. It was up the opposite side of the creek, then back down to the creek and back up the other side for #3, I think there must be some sadistic tendencies in those who set these courses. From #3 to #4 I really used my oxygen deprived brain. I could just follow the contour of the hillside, with the creek to my right, at a nice cut-in with a large rock, bam! Well not really, it was more like head down to the creek, jump over the water and try to land on the opposite bank, well it looked like bank. It turns out it was just some snow covered leaves and sticks that swallowed my left leg up to my knee.

A few moments later I was crossing the same creek when I landed on a rock that bent my foot like a horseshoe. Then I twisted my ankle, got a twig snapped on the side of my face, then took a whipping twig strike to the giggle-berries, tripped over a branch and found #4!

From this marker to #5 was just follow a creek, halfway back up the hill and around the bend and there it should be. According to my clue sheet marker 169 would be on top of a small knoll. There it was, right where it should be, except it was marker 166. I spent the next 45 minutes looking back and forth. I climbed to the top of the ridge, found the trail (called a handrail) followed it over a hill then cut back down the side of the ridge and found marker 166, again.

I'd been in the woods for two hours at this point and I wasn't even halfway done.

I couldn't for the life of me find the fifth control. The sun had melted the snow on the western side of the gully, my feet were soaking (but still warm thanks to Smartwool's new PhD socks with WOW technology) my legs were wet, my ankle had a nice twinge and I had had enough. I checked the map and looked for the most direct route back to the start and the car.

As you probably know, while creeks are the roads of the forest the ridge-tops are the highways, really cold and windy highways. I pulled my hat down swallowed my pride and headed home, then to add injury to insult I of course got a cramp in my right quad. I got back without too much trouble, turned in my SI card and asked where marker 166 was on a map so I could see how far off I really was. Oh wait! the course setter had made an error on the clue sheet; I was supposed to be looking for 166. He was really sorry, and apologized profusely.

I got in the car, cranked the heat on my feet and headed home to think of how I could spin this in some sort of positive light, at least I had an Alpine Shop driclime jacket on. Don't worry kids, only 33 days until the next one!
Posted by Adventurer at 3:09 PM No comments:

I took two of my kids and my nephew to see Grand Canyon Adventure: River at Risk at the St. Louis Science Center Omnimax Theater this weekend. There are some places in this world that are just made to be featured on a wrap-around screen like that if you can't be there in person, and the Grand Canyon is one of those places.

I have been smitten with the Grand since I got my first awe-inspiring look at it years ago. Four years out of college, I made the decision to get out of my chosen profession of sports journalism. I planned a two-week trip spanning the continental U.S. and drove my trusty little beater Chevy truck for almost 4100 miles across swampland, plains, mountains and desert. And this was how I came to be driving up the road from Flagstaff completely unprepared for a hike in the high desert. Working for an outdoor retail company now, I realize just how lucky I was not to suffer a serious case of dehydration. But at the time, I was just exploring and my mind was not on water in my camera case. It was on the thin sliver of river running a mile below through the canyon.

And I'm not sure my mind has ever left that river.

Many of us have a "life list" or as the recent movie featured, a "bucket list." Well, paddling the Colorado River through the entire Grand Canyon has been on my list from that day. And I can say this after the movie this weekend: I think I may be closer to getting my family on the river than I have ever been in my life. The first words out of the kids' mouths to my wife and me after the movie were: "Can we go?"

Oh yes we can.

Now I'll be the first to concede that this might not be happening for a few years, but I can't help but get excited about this now. Thanks to this movie my family is getting excited about an adventure again. My kids are the ones pushing for an adventure now. I guess that means we have been successful in instilling a sense of wonder and a sense of exhilaration at being in some of the world's most gorgeous locales.

I can just picture it now: my family's faces as we hit a massive wave in the middle of Lava. I can't wait.

What's on your life list?
Posted by Adventurer at 12:00 PM No comments:

For our first date, my wife and I went on a hike. I guess, looking back, it obviously wasn't the usual "meet for coffee" or "dinner and a movie" get together; but for us, it seemed to be a perfect fit.

I picked a place neither of us had been before, a small section of the Castor River near Fredericktown, Mo., named the Amidon Conservation Area. From what I had read in Steve Henry's 60 Hikes Within 60 Miles of St. Louis, Amidon was home to Missouri's only pink granite shut-ins. It was supposed to be an easy hike and I figured it should make for at least a pleasant first date. 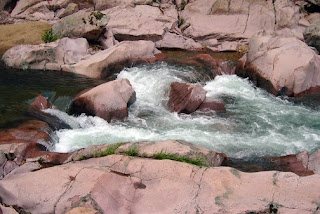 A major storm system earlier in the week had scoured the pink granite walls clean of moss when we visited. The Castor was running clear and fast through the shut-ins and we were both captivated by the place.

Recent pscyhological studies have shown that nature can actively reduce our stress levels. So, maybe it was no mere coincidence that our first date was largely free of any awkward silences or horrible nerves. Instead, our first date was filled with laughter, enjoyment and anticipation of our next hike together. A little over a year later, we were married on that same spot. It has become one of the most cherished locales in our - and our kids' - lives. 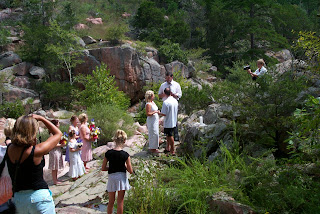 We've gone back many many times since that first date, but I don't think it's ever been that beautiful again. The pink walls have never been so clean and the water has never been so blue since that first time. I don't know if that's just my memory of the place, of that first date; or if that's the honest to God truth. I guess it really doesn't matter. It's still beautiful no matter what time of the year you go. (And so is my wife.) 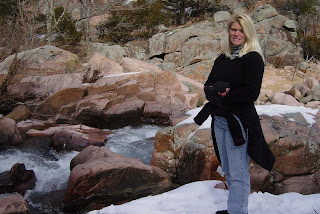 So get outside this weekend. I highly recommend Steve Henry's 60 Hikes Within 60 Miles of St. Louis. You can find it at our Alpine Shop locations in St. Louis. And using it, you can find a place that you and your loved one (and ones) can cherish. Find a place to fall in love. It worked for me.
Posted by Adventurer at 9:39 AM No comments:

Here we are, the first full weekend of February, and the weather folks are telling us to expect temps in the 60's.

I've only got two words for you: Get Outside.

Late last year, a bunch of the higher ups here at Alpine Shop got together to discuss the future of the company and which direction we wanted to go. Part of that discussion included what our vision was as an organization. And as we went back and forth about what we stood for, the conversation turned into something completely different than what I think our moderator expected. We began to talk about how each of us worked at Alpine Shop because we had experienced some deep fundamental change in our lives due to a discovery we made about ourselves while we were outdoors.

For me, it was my first trip to Yosemite National Park in California. My backpacking trip there changed my life. What did I discover about myself? I realized that I could go far beyond what I believed my physical capabilities could handle. I discovered that there are places - and perspectives - in this world that you truly need to earn your right to experience. And once I had experienced them, I have never been the same again.

So what can you do this weekend to change your life? What can you do to discover a new and improved You? There are more options than you can possibly imagine. Discover the Ozark Trail (www.ozarktrail.com) and its more than 350 miles here in Missouri alone. Take the kids for a hike through a local park. Even just walk through Forest Park and take in the St. Louis Zoo.

You already know what's in your apartment, your condo or your house. Discover something new this weekend. Get outside.
Posted by Adventurer at 8:55 AM No comments:

In the best interests of the company, Alpine Shop made the decision to move the 9th Annual Great Canoe & Kayak Event from February 7-8 at the Kirkwood Community Center to March 27-29 on site at Alpine Shop Kirkwood.

We hate to mess with these schedules as much as anybody; but in this economic climate, it doesn't make much sense for us to concentrate on paddling during the first week of February. There's still too much skiing and boarding to do. So we've pushed the paddle event to the last weekend of March. For all of you that have offered to host clinics and trip reports, we hope you can make it back with us then. If you can't, we surely understand why not.

For our customers, we hope we haven't inconvenienced you too much. And we promise we won't be moving the dates - or the location - on this event for the next few years.
Posted by Adventurer at 10:54 PM No comments: