The end of April is always a great time for climbing trips! Several friends and I headed to Horseshoe Canyon Ranch in Arkansas for the weekend of the 23rd and 24th. We left after work on Friday, to make the 5.5 hour drive from St. Louis, which means we pulled into camp around 11pm. As expected, the campground was packed, but luckily we had another friend get there earlier in order to grab a campsite. Even so, the place was really busy and we ended up sharing our campfire with two other groups over the course of the weekend.

Saturday morning we started our climbing at the area called Confederate Cracks where we hoped to find fewer climbers than on some of the more popular walls. Overall we got 4 ropes up in the morning before an early afternoon break (though not everyone climbed each route). My personal favorite was Treebeard, which was a 5.8 crack climb.

We had a couple kids with us on this trip (7 years and 10 months), so for the afternoon some of us went back to camp early to hang out and relax, while two of the other climbers went on to climb into the late afternoon. While on a short afternoon hike with the 7 year old, I found this neat area about 20 feet across where down trees had been gathered and then burned. There were several really neat rocks with charred wood wrapped around them in interesting ways. After the hike we set about making a great fire so that we could have hot coals for cooking with a Dutch oven. To make things simpler, we made one meal for our group. We tired out a new goulash recipe that fed 5 adults and which ended up having enough left over to feed another 2 or 3 adults. This was the first time we had used this particular recipe and we weren’t disappointed, we found it online at a site called Bryon’s Dutch Oven Recipes. For a green side dish, we also made two foil packs of Asparagus and Peppers, YUMMY! After this meal, we were so full we didn’t even get to the Chocolate Cake (don’t worry, we ate it Sunday after we were done climbing)! The rest of the evening was spent around the campfire, chatting with our camp mates.

On Sunday morning, we knew we had a limited amount of time available before we had to leave so we stayed relatively close to the campground. We started at Prophesy Wall, where we found a neat chalk wall drawing left by someone else. It was also here that I captured a great picture of my friend “catching some air” on a hard route. Next we headed to the Titanic boulder, and yes it does kinda look like a ship! The Titanic boulder was a neat place just to hang out and we soon discovered that voices carried very easily “through” the rock, as there is a crack on both sides that is part of the same split of the rock. While in this area we also got several great views of a near-flying turkey vulture. Unfortunately I was so dumb struck by how close he was that I didn’t get the camera out until he was farther away! On the way back to St. Louis, we stopped for Mexican and devoured our meal, which tends to happen after climbing.

Overall, it was another great weekend climbing in Arkansas!!

Posted by Anonymous at 9:56 AM No comments:

This trip report was originally posted on our Columbia store's blog at:
alpineshopcolumbia.blogspot.com. Check it out yourself!

We showed up for a great saturday on the Saint Francis river near Fredericktown, Mo to find bridge-level water, great friends and amazing weather. We got in a quick first run down from millstream gardens, and then followed it up with a second run of the same stretch. It had been a while, so the water felt great. The Saint is quite a gem tucked away in the Ozarks. We really do have some amazing stuff here in Missouri. 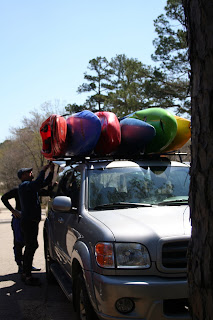 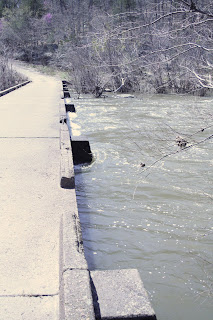 Some views from the put-in 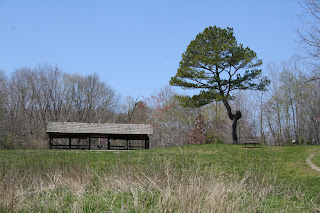 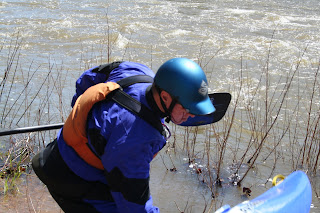 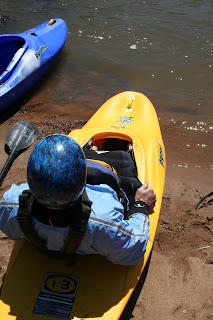 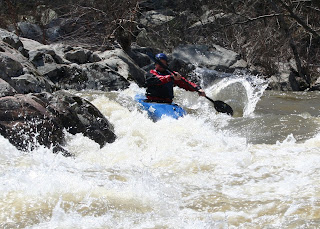 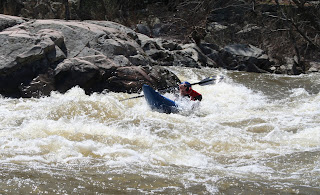 Ran into a lot of fellow paddlers at Double Drop 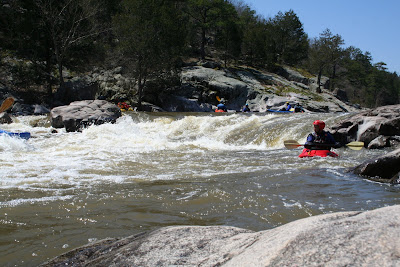 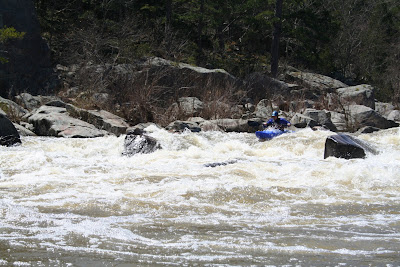 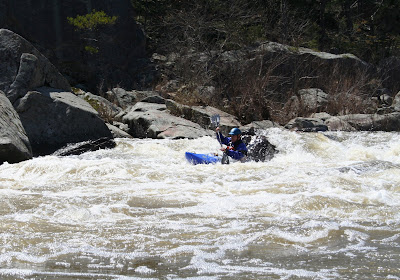 Posted by Adventurer at 8:26 PM No comments:

Thoughts on the First Night of Banff

I've been hosting the Banff Mountain Film Festival for Alpine Shop in St. Louis for quite a few years now and there's always something amazing each and every time we do this.

A lot of people think we get to see all of the films beforehand and hand pick which ones we think will work best. Well, there's some truth to that; but the whole truth is a lot more interesting. You see, we get about two minute clips of each of the films. So, you can imagine with a film like Red Gold last night, it's impossible for us to tell whether or not an hour-long feature film will be any good based on that clip. It's kind of like a film critic writing reviews based on trailers instead of the actual movie. No, what's great about Banff is that I'm seeing these films for the first time alongside everybody else. That's not to say that there isn't work done by a bunch of people to select which films we think will go over best; but we just never know until the lights go down each year.

The Red Helmet kicked off the show with the tale of a youn,g timid boy coming to grips with his fears after he finds a red helmet in the forest. After experiencing the lives of a number of adrenaline sport athletes (kayaker, climber, mountain biker, etc.) through the helmet, the little man faces his own fears and takes the plunge, literally. Good start to the show.

Papiroflexia (Spanish for origami) was an animated feature. Dealt with the dream to get rid of all the noise and pollution of our lives and get back to nature. Will it be the most popular animated film of the year? We'll have to wait till tonight to see The Cable Car to find out?

Now for the most controversial topic every year at Banff... did the feature film live up to your expectations? Red Gold dealt with a proposed mine at the headwaters of two of the largest remaining sockeye salmon runs on the planet near Bristol Bay in Alaska. I'll just say that I loved the film. The cinematography was gorgeous. The story resonated with me. I know there were people that thought it was too long. But I'd be interested in what some others thought. What did you think of Red Gold? (For conversation's sake, I think the best feature we've ever shown was Alone Across Australia during the 2004 tour.)

The Sharp End: Eastern Europe was hands down the funniest movie of the night. "We don't drink a lot, a lot. I mean 8-10 beers a day is standard." That pretty much sums up this group of Checzk climbers' philosophy. Not that this film was all drunken play. Some of the climbing was pheonmenal. A little humor never hurts, though.

One of the fascinating things about this festival is an almost 50-50 split among our audience as to why they've come to Banff. Half of them come strictly for the adrenaline. The other half are there for the culture and nature. Maybe I'm generalizing that a little much, but I can tell you each year I hear from numerous people "Why didn't you show more of this?" or "Why did you pick that?" and it always has to do with the cultural/adrenaline split. So, I wouldn't be surprised if half of our audience loved Shikashika and half hated it. This was the story of a Peruvian family that climbs into the Andes, hacks enormous blocks of ice from the mountain glaciers and brings them down to the valley on the backs of mules to shave off and sell as snowcones (or as they call it- shikashika). Can you imagine the TroMo kids having to bring down the blocks of ice from the mountains to give Kirkwood it's snowcone fix? That's what I kept thinking anyways....

The last two films, Under the Influence and Seasons, both showcased the adrenaline rush with two of the best production groups in the business today. Teton Gravity Research's Under the Influence had some absolutely unbelieveable powder footage from last year's massive storm system in Jackson, Wy. Seasons comes from a group called the Collective. Every year that they have a film in the tour, I'll pick it. They've been on the cutting edge with their style in all three films they've produced starting in 2004 with their self-titled DVD, The Collective, and continued with ROAM and now Seasons. Their work features some of the most innovative use of zip-line cinematography, super slo-mo and helicopter footage you'll ever see. So, in the future, just so you know, don't miss a mountain biking film from the Collective.

So that was night one. Tonight, our feature film is Journey to the Center, and we'll move from sockeye salmon to BASE jumping. That's Banff for you. It's why I love the festival so much and look forward to it all year round.

Hope you enjoyed it as much as I did last night. Leave a comment on what you liked or hated...

By the way, funniest Banff film ever: Xtreme Tramping II: Lord of the Springs.
Posted by Adventurer at 7:41 AM No comments: