Back in 2003, I was on pace to hit about 70 days on the river in a whitewater kayak. That June alone, I was planning on spending 17 of the 30 days of the month either creeking or in a playboat clinic.

A funny thing happened, though, on my way to the St. Francis River take out on Memorial Day that year. While playing in a pour-over not 200 yards from my car, I tore my rotator cuff. (Or, at least that's all I thought had happened.) After over six months of pain, three doctors, eventual surgery for impingement syndrome and then three months of recovery, I came out of my "non-boating" period in 2004 with a completely different life: went in single, came out married; had a different job with Alpine Shop, a new house and a completely different lifestyle. The closest I would get to 70 days on the river was a five day trip I took in October of 2004. Chalk it up to the rigors of family life - and the incredibly hard transition involved with caring for our disabled daughter who arrived in 2005.

So, why the long back story? Because 2010 is the year it looks like I'm getting back on the river. Alpine Shop just got in its first shipment of demo boats from Jackson Kayaks and we're getting everything together for our first demo days in February down on the St. Francis River. 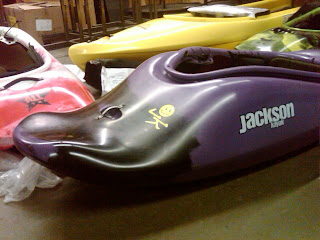 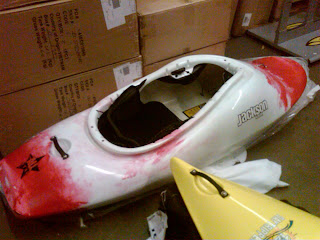 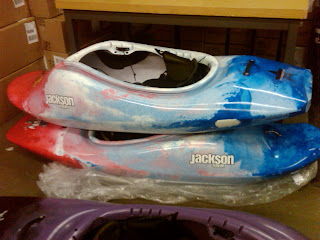 Demo Days begin on Saturday, February 13. See you then! 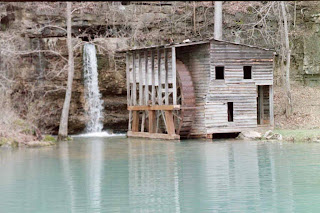 As shown in this link to the River Hills Traveler, this April the Mark Twain National Forest is asking for volunteers to help restore the old mill and cabin at Falling Spring in Oregon County, near the Arkansas border.

This very special and unique natural and historic area is about as isolated and unspoiled as it gets in Missouri. But it's very remoteness means that it is very susceptible to neglect and vandalism. The 1920's mill and nearby cabin are wonderful historic relics of the past located in one of the most spectacular parts of the Ozarks near the Eleven Point River and the heart of the Irish Wilderness, a federally designated wilderness area.

This area abounds in natural and historic wonders, ranging from the nearby Wilderness Cemetery to Turner's Mill, spring, and cave on the Eleven Point National Wild and Scenic River.

That makes this is a wonderful opportunity to get to see one of Missouri's wildest corners and help protect and rebuild an important cultural resource for future generations to enjoy!
Posted by paddleman at 1:25 PM 1 comment: 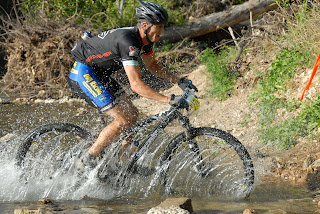 Two of St. Louis’s top cyclists will go head-to-head this weekend in an indoor race for charity. The inaugural Rollin’ for Charity Indoor 100 Bike Race will pit man versus woman and mountain bike versus road bike in a race to raise cash and ride 100 miles on bicycle rollers at Alpine Shop’s Kirkwood store. 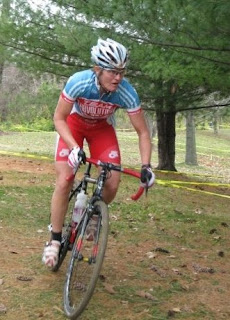 Alpine Shop, employer for both Ploch and Cash, has offered a $500 prize with $350 going to the charity of the first racer to complete the 100 mile race and $150 to the second-place racer’s charity.

The truly unique aspect of this race will be each participant’s bike. While both will ride on rollers - a type of treadmill for bikes known for its difficulty - Ploch will be racing on his Gary Fisher Superfly mountain bike and Cash will be on her Team Vera Bradley Foundation Specialized Amira road bike.

“100 miles on indoor rollers is going to be uncomfortable,” says Ploch. “But nowhere near what my grandmother went through with ALS.”

“Racing 100 miles - especially indoors - is like a puzzle,” says Cash. “You start with a lot of pieces. Eventually, the fewer pieces you have left, the better the picture looks.”

Both riders are aiming to raise $1500 for their respective charities through this competition. Anyone wishing to support Ploch and the ALS Association St. Louis Regional Chapter or to support Cash and the Vera Bradley Foundation for Breast Cancer can visit alpineshop.com for links to the specific charities. Pledge amounts may be made in any amount. All supporters will be entered to win in various drawings throughout the day.

The race will begin at 11 am at Alpine Shop Kirkwood (440 N. Kirkwood Road, 63122) and will run for approximately four hours. To make this fun for both racers, as well as those who come out to support them, mini-competitions will be held each half-hour during the race with prizes given to the winning racers’ supporters.

The Rollin’ for Charity Race is part of the Outdoor Fitness Festival going on Saturday, January 9 at Alpine Shop Kirkwood. Various clinics will be held throughout the day giving tips on using the outdoors to accomplish your 2010 fitness goals.

The current Missouri State Cyclocross Champion, Cash is the co-founder of Team Revolution – a cycling education and advocacy non-profit organization for women. Following three years of racing for her own organization, Cash is heading into her first year as a professional cyclist racing for Team Vera Bradley Foundation. In 2009, Cash had 14 top 20 finishes in major competitions including five top 10 placings.

Chris Ploch is a four-time Missouri State NORBA Champion and currently races for both Team DRJ-Racing and the Gary Fisher 29er Crew Racing Team. He was also the 2009 champion of the Alpine Shop Short Track Dirt Crit Series and has made the move to the Semi-Pro status heading into 2010. Last year, he also participated in the Missouri River 340 River Race and competed with the Alpine Shop Adventure Racing Team at the Goomna 6 Hour Duathlon.

About The Alpine Shop

The Alpine Shop began life in 1973 as a small climbing shop. Today, through its three locations in Kirkwood, Chesterfield and Columbia, Mo., it serves almost every type of outdoor enthusiast—be they backpackers, campers, cyclists, hikers, paddlers, skiers, snowboarders or climbers—with a friendly and knowledgeable staff, cutting edge products and a wide variety of how-to clinics for all activity levels.