Roger Taylor has passed away

Roger can be remember by his books on the history of the rivers in the St. Louis and Missouri region, the Watershed series, and by his three song contribution to the CD River Voices and Songs, that we carry here at Alpine.

His devotion to and enthusiasm for the rivers of Missouri will be greatly missed.
Posted by paddleman at 4:34 PM No comments: 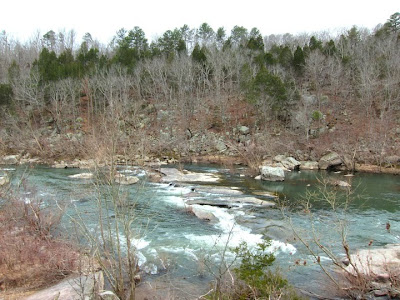 Nice runnable water, on a slight rise, on last Sunday afternoon. Reminders:
1. The Great Canoe and Kayak Event at the Alpine Shop on March 5th and 6th.
2. This river is far the experienced boater;
This reach of the St. Francis River (in lower water levels) has numerous rapids in the class II to III range that can pose problems for lazy or inexperienced paddlers in canoes or kayaks, though none is a serious threat to paddlers in rafts except at very high flows. Strong cross currents, haystacks and small holes around the large rocks that create the rapids demand good planning and execution to avoid pinning and/or wrapping a canoe or kayak.
Most hazards can be scouted from your boat in the river, but if there is a doubt about the best line, then beach the boat and take a look before proceeding. The largest rapids will be in the lower 2.5 miles of this 15.7 mile run. None of the rapids should pose any serious problems for paddlers with at least strong intermediate level whitewater skills.

Highway H bridge one mile west of Syenite at 0.0 miles; SH 72 bridge at about 10.7 miles; Millstream Gardens State Forest at about 13.2 miles; Highway D bridge at USFS Silver Mines Campground at about 15.7 miles. There may be other access points along this reach of the St. Francis river.

While I feel that there are many special places on our planet-not the least of which is our beloved Ozarks-there are few places as unique and wondrous as the canyon country of the Colorado plateau in Utah. It would consume-and has-many lifetimes of determined effort by many individuals to see just a fraction of the secret waterfalls, canyons, cliff dwellings, and ancient rock art that abounds in canyon country.

I've been fortunate enough to have gotten to see some of Canada's canoe country wilderness, the High Sierras, the redwood forests which astonished be beyond words, some of the Alps, Rockies, and the Appalachians, but I've never been as awed by God and nature as I always am when I have the pleasure of traveling in Southern Utah. I'm sure this slide show will help other experience a bit of what that part of the Southwest has to offer, even if it does emphasize places that are not yet protected from damage and development.

AN AMERICAN ICON: UTAH’S RED ROCK CANYONLANDS
Alpine Shop Kirkwood will host a traveling presentation entitled “Wild Utah: America’s Red Rock Wilderness” on Saturday, February 20, 2010 at 3 pm.
Robert Redford narrates this multi-media slideshow documenting citizen efforts to designate public lands in southern Utah's spectacular canyon country as part of the National Wilderness Preservation System. This 15-minute journey through red rock splendor invigorates and motivates viewers to participate in the movement to protect these unique lands.
“Wild Utah” was made possible through the generous donation of photos, music and words from concerned Utahans who wish to pass this heritage on to future generations. It will be shown in conjunction with a presentation on the current status of the Utah wilderness movement by Clayton Daughenbaugh, Midwest Regional Organizer for the Southern Utah Wilderness Alliance.

The Southern Utah Wilderness Alliance and its partners in the Utah Wilderness Coalition seek to gain local support for the “Citizens’ Proposal” to protect wilderness areas in Utah’s red rock canyonlands. Legislation to do so is currently pending in the United States Congress and administrative decisions by the Department of Interior are ongoing.

“These are spectacular public lands owned by all Americans. As citizens we have a great opportunity to act to protect these special places,” Daughenbaugh said.

Daughenbaugh is also the Chair of the Sierra Club’s National Wildlands Committee and, a former Chicago community organizer, is author of “Common Sense Democracy: How to Complete the American Revolution in Your Neighborhood.”

I wanted to clarify some things about our WNS planning at the Missouri Department of Conservation.

WNS is not in Missouri yet. We are checking certain hibernacula this winter--actually most of that is being done by Tony Elliott, my fellow cave/bat biologist from Kirksville, and Derek Shiels, our cave biology assistant. We follow the WNS disinfection rules.

As Mick reported, we are working on our MDC WNS Action Plan, which governs the 290 MDC caves we are responsible for. Actually, we have not closed all 80 known MDC bat caves yet, but that is in the plan once a "WNS trigger" occurs, which would be WNS reliably reported or confirmed in Missouri or an adjacent state. We are working on refining our tiered approach to further triggers, in which we would further control access to other caves. So, the exact sequence of closures is not determined yet.

We did totally close Smittle Cave to permit caving recently. No more permits in the spring and fall for the forseeable future, the primary reason being that up to 500 people were going there, under permits, every year, some from out of state, and we could not adequately prevent the possible accidental introduction of the WNS fungus, Geomyces destructans, with that kind of situation. Smittle Cave is an important site for endangered gray bats year-round, and other bat species. We have seen a decline in the gray bats over the last two years too, so we were concerned about that being caused by too much visitation anyway.

Before I joined MDC in 1998 the official MDC policy was that MDC caves are closed to caving unless signed open or you had a proper permit, which could be granted by certain signs. That was widely misunderstood and ignored by many. With the threat of WNS coming, we think it is necessary to emphasize this existing rule, which is in the Missouri Wildlife Code, adopted by the Conservation Commission many years ago. One change we did make years ago was to remove cave locations from our area brochures, which I changed as MDC's cave biologist. So, we tried to regulate cave access to three types of caves: Class 1 (open if you abide by certain rules), Class 2 (permit access), and Class 3 (closed except for research). These are the same three classes used by the other state and federal agencies in Missouri. With our new emphasis we will be changing our signs to clarify this "closed unless signed open" requirement, especially if WNS hits. But we do not plan to close all of our caves in one move unless it is warranted. We will do it in steps.

Even though we still have our old signs, we have asked our area managers to require that WNS disinfection be required to enter all MDC caves. So, we would appreciate the cooperation of organized cavers, and perhaps y'all could help by informing and teaching others who go in caves.

Some people are questioning the value of disinfecting caving gear, and say that WNS will arrive via the bats anyway. I strongly disagree with that idea. There is strong circumstantial evidence that WNS spreads via both humans and bats, and we need to give our bats the best chance we can. Six specis can be infected so far. We hope to slow the spread of WNS and buy time for our bats and caves in case researchers can come up with an effective treatment method soon. The antifungal, terbinafine, is being researched now.

Some recent news: WNS was confirmed in one bat, Myotis myotis, in a French cave. This revives a hypothesis that WNS came from Europe somehow, possibly via caving gear, and that our bats are less resistant to it. That is just one hypothesis. Other news: A recent test showed that healthy little brown bats got infected after they were introduced into a WNS-infected site in the eastern USA; the site was by then absent of bats and screened to keep the new bats from exchanging. So, once a cave is infected, bats can get WNS from the environment. Also, we recently learned that WNS-infected bats in Pennsylvania had a much higher mortality rate in a site where the cave gate was breached and humans disturbed the bats, than there was in a nondisturbed WNS site. So, human disturbance of bats is still a major factor in their demise, even more so with WNS. Therefore, you can expect to see more cave gates being built on important bat caves, and more enforcement. Those will not solve the entire WNS problem, but there is no one method that will solve the whole problem. We intend to do our part for now, hoping that brilliant scientists will figure out what we can do later on.

We established a Missouri WNS Working Group of biologists, land managers, cave owners and cavers at a meeting on Feb. 5. The purpose of the group will be to exchange information as it comes out from the Fish & Wildlife Service, eastern state agencies, scientists, and our group. I will not be sending out much information until we have completed our MDC WNS Action Plan, we hope by March, maybe later. Many agencies and landowners want to see the MDC plan and possibly follow some of the elements in it, but we do not expect them to simply adopt MDC's approach. They have the right to adopt their own plans. However, MDC does intend to lead an effort to develop a statewide WNS plan, which will mostly be information-sharing and cooperative planning. MDC has state constitutional authority to regulate fish and wildlife in Missouri, so we take that responsibility seriously and hope to help all to work on this problem.

Cavers, master naturalists, college classes, stream teams and others qualified in caving may be able to participate in a cave stewardship program, which MDC hopes to initiate later on. We are not ready quite yet, and it is not really funded yet. Trained cave stewards could help MDC and others by learning disinfection, monitoring abnormal winter bat activity at selected cave entrances, and checking other things under MDC permits. This will not be the style of caving that everyone likes, but I know serious cavers who are already planning to get involved in this.

I would like to compliment CRF, MSS, Chouteau Grotto, Hi Lonesome Master Naturalists, Springfield Plateau Grotto, Kansas City Area Grotto and many other cavers who are preparing wholeheartedly for WNS. We still need skilled cavers to map, photograph and document caves, bats and other resources. We will all have to be more cautious about entering bat caves in the future, including common caves with eastern pipistrelles (tri-colored bats), as they are susceptible too.

Missouri Department of Conservation
Posted by paddleman at 12:45 PM 2 comments: