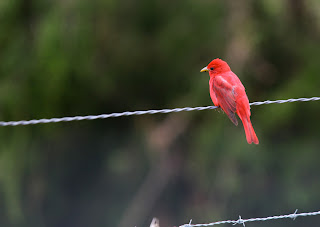 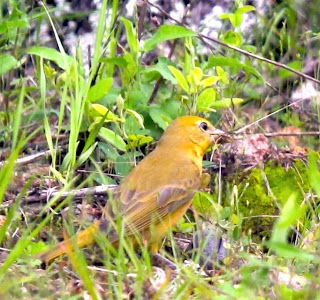 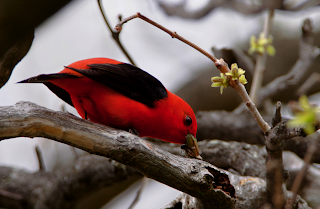 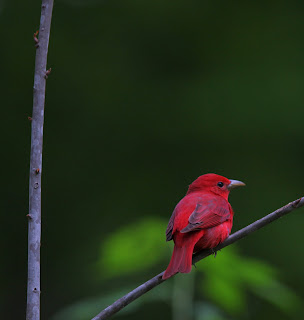 Most of us spend a great deal of time outdoors in the months April-October in Missouri and Illinois. For the most part, we are casual bird-watches (birders). In the Past three years I have gained a profound interest in our beautiful summer migrating birds; especially tanagers and wood warblers.
Two-three weeks ago I spent about some time on the North Fork of the White River in southern Missouri, hiking, flyfishing, and photographing migratory birds. I was astounded at the colors that the tanagers presented. Some were still in their mating season molt, and had multiple combinations of colored feathers; all with some red and yellow. The mature male birds, that had arrived weeks earlier, had the full red feathering. They migrate every spring from South America to Missouri and Illinois and points north to breed.
There are two types of tanagers that breed in Missouri, the Summer Tanager, and the Scarlet Tanager, both primarily red. The females of both species are primarily yellow-orange with some green hues. They nest high up in Oaks and hickories and do not mind Missouri mixed pine forests. They feed primarily on insects, and spend their summer in our tree canopy.
A good pair of binoculars or a spotting scope brings them in close enough to examine. However, in early - mid May they are building nests and come to ground for grass. Usually the female picks up the grass for the nest, and the male stands guard on a low branch or fence, to watch and guard for her.
The Summer Tanager (more common) is so bright and rosy, that red over-saturation is a photography issue; the Scarlet Tanager, which can be identified by his black wings, requires a larger territory (about 5-10 acres for forest), so there a fewer to see. The Summer Tanager requires only about 1 acre of territory.
They are common in Forest Park, Shaw's Garden, Kirkwood Park, and can be seen just about anywhere there is a grove of trees, in St. Louis. Tanagers are about the size of a cardinal (only slightly smaller). The next time you think you see a cardinal, especially if it is more than ten feet or higher in a tree, look again you might have spotted an immigrant from South America.
If you decide to hike and photograph birds, do not forget to look at the full line of Mountainsmith shoulder bag called the "camera tote" at the Alpine Shop stores in St. Louis and Columbia. You can carry your camera and maybe an extra lens or two, without stashing it on your back. These bags are so easy to use and allow you to quickly draw your camera from your side.
Pictures taken by me with a Canon 5d MK II and a Canon 300 mm f2.8L IS lens with 1.4X teleconverter. Handheld. Click to enlarge.
Posted by missouri man at 8:44 AM