The old bridges of the Meramec Basin 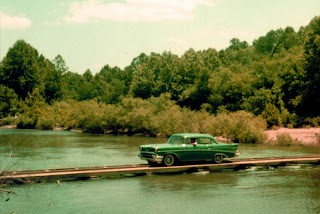 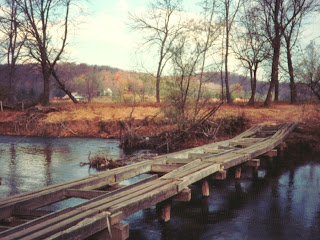 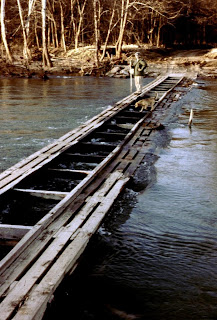 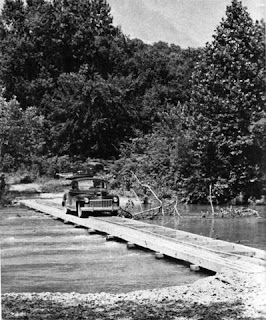 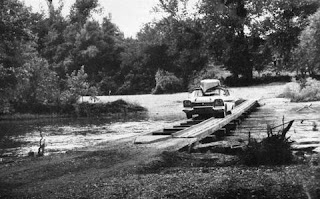 For older paddlers that floated the Meramec, Huzzah, or Courtois during the 1970's or earlier; you will remember these old Hog-trough bridges.
Prior to the Hog-trough bridge prevalence, there was about 10 years of Corduroy bridges (during the 1920's-1930's) at local fords (crossings that required you to drive through the river on gravel beds). Corduroy bridges where made by placing and nailing logs perpendicular to the banks to create two rails; after that was completed, eight foot logs or railroad ties were spiked to the rails one after another parallel to the current. These were a great improvement over the fords until they became slick with algae and the spikes were exposed; usually the third year. At that point it was not unusual to be pushed off the bridge by current, or get multiple flat tires.
Then about 1930 the hog-trough came into play and the concept lasted almost 45 years. They were most common on the Courtois, Huzzah, and Upper Meramec Rivers, however there were a two on the Current River at Montauk Springs and at Cedar Grove.
During the early 1970's most were replaced by low water concrete bridges or planked over to make it easier for "city folk" to drive across. Eventually, the planking was also covered with concrete.
Finally by the mid-1980's they were all replaced by concrete bridges.
To my knowledge, there was a hog-trough at each of the following locations;
on the Huzzah Creek;
Davisville
Huzzah Post Office
Harper Ford
Kenner's below Highway 8
Scotia
on the Courtois Creek;
Hazel Creek
Blount's Ford
Butts
Moutrays Place
Scotia
on the Meramec River;
Cooks Station
Wesco
Scotts Ford
Onondaga
Blue Springs Creek
Examples below;
(some shots courtesy our Customers; click to enlarge)
Posted by missouri man at 11:15 AM

We floated those streams from the late 50's into the 70's. I just checked with my brother and a friend, and we all remember calling the bridges "horse trough". Was that due to our St. Louis dialect/warsh?