On the evening of July 25 into the morning of July 26, Team Alpine Shop was hard at work in the Bonk Hard Racing Dusk To Dawn Adventure Race. Nine hours after their start, our team consisting of Carrie and Jeff Sona, David Frei and Doug Nishimura, have another win in the books. 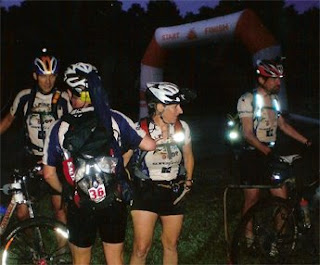 Doug, Jeff, David and myself headed to Lake Perry for D2D. We have done this race all 4 years and love the format. Race mantra- “Start at dusk and finish at dawn- racin’ in the cool of the night”.

The pre-race meeting was at 7:30 pm and we got the maps. With all of us relegated to reading glasses except our youngster Doug, at 40, we were happy to see that all the controls were marked and we didn’t have to plot. The race start was moved up to 8:30. We went back to the TA and got busy route planning. We would start on foot and then we would come back to the TA once early and then not til the finish. The start was moved to 8:45 and we lined up. Jason held up the flag, played the national anthem and then shouted go. Fast and furious start as usual. About a mile road run to 3 controls in the woods that could be obtained in any order. Mass crowd to CP 1 and 2 and then on the way to 3 some teams cut off at a pond that didn’t seem far enough to David so we kept going. We were in and out of 3 at the front and headed back to the TA. We were happy that the 3rd control was a little challenging to separate the field. Total mileage of the first O section was at 4 miles. A couple of solo racers got back ahead of us by a couple of minutes. Next up was heading out on bike and then to a bike drop. Exciting event for 1st section- Doug lost his shoe in thick mud twice.

A few miles ride to get out of the park to a bikewhack to the road. We saw Phil (soloist) taking the hill to the left of where we went up. We got up the road farther and saw a 2 guy team ahead and passed them. Then we saw Eric (soloist) and were feeling good as we were in the lead with them. Phil and Eric stuck with us until we got to the paddle. Few uneventful controls on the bike before the bike drop. 22.5 miles to the bike drop followed by the second trek section that looked like straight forward follow the trail type stuff to the paddle put in. We were disappointed that the nav was easy but it turned out to be more challenging than we thought. Staying on the trail was difficult. David didn’t want to give up on it and just head south as finding it again when it petered out could prove tough. He was right so we pace-counted and stayed focused to keep track of where we were on the map closely. With his careful nav we went right to everything and got to the canoe. Second trek ~ 4 miles. Gear check with some nice identical twin sisters at the canoe and then we started paddling. Exciting event for section 2- I went down hard on my left hip on the gravel skidding to a stop at one of the controls. I have a big bruise there now as a result.

At the paddle, Eric and Phil got to paddle their kayaks while we had lovely aluminum canoes. We chose to take only 1 kayak paddle (for me) but the paddle was twice as long as we thought as we didn’t realize we were going to paddle to our bikes and then put them in the canoes with us and take them to the paddle take out. The paddle was beautiful with a crescent moon and perfect temperature. We paddled to the bike drop to load up our 50 + pounds of expensive weight and secured them in the boats and headed out. The soloists had their bikes moved for them as they were in kayaks so they got to keep moving and we got behind them and never could catch them again. Bushwackers was the closest team to us and we knew they took kayak paddles so were worried. We saw the Bushwackers glow sticks as we headed out of the CP. Jeff was bumming he didn’t have a kayak paddle and was moving his little canoe paddle like crazy. We paddled to the take out and kept looking back but we never saw Bushwackers. Paddle 9.2 miles. Exciting event- lake so shallow in the middle of the lake that Jeff got out and pushed at one point.

At the boat take out we unloaded our bikes and had a 3 point O section. As we headed out we saw Eric finishing the O. We had a little problem with one on the shoreline that took a few minutes but no major deal. When we got back to head out for the last bike section we saw Bushwackers coming in from the paddle. O section 3 miles.

Last bike was ~ 20 miles with 6-7 of it a rocky, single track section. First section of single track was fun but by the end I was losing my sense of humor with the rocks and ready to get to the finish! There was a night trail run on the same trail that night and there were pink ribbons and glow sticks adorning our route but the prettiest sight were the jugs and igloo coolers full of water at the CP in the middle of the single track. We were all at the end of our water so we guzzled, filled up some bottles and headed for the finish. Crossed the line just before 6 am. Exciting event- 1st place finish!

Results/splits http://www.bonkhardracing.com/races/dusk_2_dawn/results.asp. Good race all the way around. Well organized, fun format, CP’s spot on. Sadly, Jason says this is the last year for D2D at Lake Perry but we’re hoping he finds another spot for this great race. Thanks to Jason, Laura, Kelly Sumner (course designer) and all the volunteers.

Posted by Adventurer at 2:15 PM