David Frei and I (Jeff Sona) – members of Team Alpine Shop - signed up for the New Belgium Brewing Urban Assault Ride a week before the race. This is a scavenger hunt bike race starting in Forest Park in St. Louis to checkpoints across the city with various challenges at each one.

Five checkpoints were given to us via the web prior to the event with one mystery checkpoint revealed via a word scramble clue 2 days before the race. That clue was: “antarctic granola limbo dens”. That turns out to be “Botanical Gardens Climatron”.

A trivia quiz promoting race sponsors and cycling was e-mailed out on the Wednesday before the race and based on the score on the quiz, teams started in three heats, two and a half minutes apart. Our trusty team secretary, aka my wife Carrie – also a member of Team Alpine Shop, scored a second wave start for our team, two and a half minutes back at the start.

After the word scramble, the known checkpoints going into the race were the Botanical Gardens Climatron, Tower Grove Park (Gus Fogt Picnic Area), BicycleWORKS, City Museum, Big Shark and Mesa Cycles. We would collect a bead to put on a chain at each checkpoint. Our route had us going to the Botanical Gardens first and then continuing on to the others with the plan to go to a second mystery checkpoint whenever it made the most sense with our planned route. 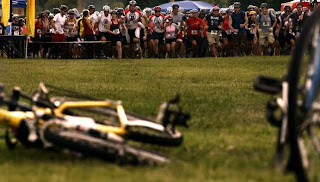 175 teams lined up at the start for a 200 yard run to the bikes. 150 seconds after the first heat took off, we ran to our bikes. We were pushing hard to make up the time and starting passing teams; so much so in fact, that we arrived at the Botanical Gardens in first place. Unfortunately, no one at the Gardens had any clue what to do with this until a lady finally came out and had us go around to the side just as other teams were getting there. Once directed, we ran around the side to the Climatron. There we were shown the picture below as Mystery Checkpoint 2: 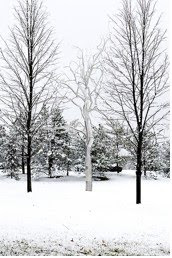 David said “I know exactly where that is. “ Back on the bikes for a quick trip to Tower Grove. We were the first team to Tower Grove Park in South St. Louis where we faced our first challenge. We both put one foot in a pair of shoes with left and right reversed with a Frisbee attaching them at the top holding 3 tennis balls. We had to walk about 50 feet to a series of cones while balancing the balls. We dropped them a couple times. 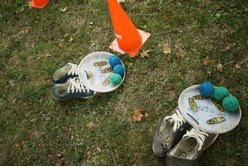 As we were heading out other teams showed up. Off to BicycleWORKS for the best challenge of the day: adult Big Wheels on a serpentine course. We probably lost a little time spinning out around the tight corners but what a hoot! Instead of putting the beads on the necklace, David was putting them in a pack and kept saying, “I hope this doesn’t have a hole in it!”

A long ride to City Museum followed with us pushing hard with a little tailwind, mostly green lights and light traffic. At the City Museum, other teams were already in the midst of the challenge: climb 10 flights of stairs to the roof, up three more flights to a tower with a ramp encircling it to the tip top of the tower. The view from the top was absolutely beautiful. Another bead and a slide ride down to the rooftop and then 10 flights back down. From David’s Wild Onion Adventure Racing days he can fly down the steps and beat me down. He ran out, got his bike and had my bike up and ready to go.

From there on to Big Shark. Because teams had their choice of route it was hard to know where we were in the pack. At Big Shark the challenge was for both of us to get on a skateboard together with a plunger and use the plunger as an oar while picking up cans of 3 different colors from buckets at the end of the parking lot. There were five buckets set up and you could only get a single can from each bucket. David was in the front with the plunger and I was getting cans. Got a red one first and rolled past the second bucket and grabbed a blue one; but I overturned the bucket and had to stop on a downhill and pick everything up. We then had to go back uphill and I took the plunger to the back and pushed us up. Another bead and on to Mesa.

At Mesa we did the wet sponge toss to a laundry basket on David’s head. We had to catch three. We got three in a row but they didn’t see the “swoosh” laid down on shot number 2 so we did one more. One more bead and to the last checkpoint which was Roxy Paine's 56-foot-tall stainless steel tree outside the St. Louis Art Museum. When we got there we were the first team there and we realized it looked like we would win because it was our last checkpoint. We picked up our seventh and final bead, placed it with the rest that were luckily all in the pack, strung them and had a short trip back to the finish.

We came in to the parking lot where Carrie was cheering and happy to see us in first place. We pulled our bikes into the field, took off our bike shoes and went through the blow up obstacle course. Taking the the kids to Bounce U had me done before David and we handed them our beads with a winning time of 1:23 and went to check out our new cruiser bikes! 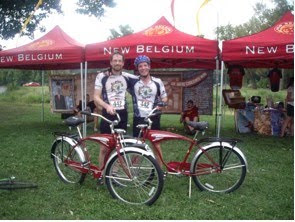 Excellent after party. Many teams had great costumes and there was a bike limbo and other games and frivolity. Do this race next year! You won’t regret it.

Link to results and photos

Posted by Adventurer at 1:29 PM